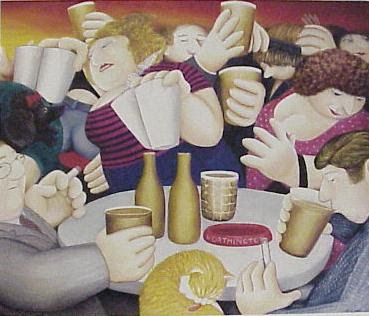 Okay. What does today have in store? Nothing planned - so that means the day is like a nice big blank canvas. I like days like that - where you can just go anywhere and do anything and see what happens. So we'll start with a nice pale blue background and then add some colours, maybe some reds, greens, blues, and so on - until it's finished. If a day were like a picture you were going to paint - how would the picture end up? Would it be full of people - like a picture by Lowry perhaps - or would there be no people in it - just me and Millie and a walk in the lovely countryside - like a picture by Constable? Or -even better - it might involve a night out with the girls later!!!! Like the picture above from Beryl Cook.
Later on I'll let you know how the picture turned out!!
Posted by The Author at 7:41 am