Weekend at home - Day One - Saturday

Saturday Morning - up at 5.30am  - set of at 6.30 for the 180 mile trip home. Only one coffee stop on the way - bit foggy - old age dictates a steady speed of about 65mph all the way!!. I came off the motorway a few junctions early and drove through Renishaw, Eckington (scene of table dancing some 25 years ago!) and Coal Aston. So many fields, so many stone cottages, so much livestock - a song in my heart to be back in the motherland!! So much space. I had to stop at the side of the road and take the picture below - because I was thrilled to see so many fields. There are fields in Surrey of course - but just not as many! 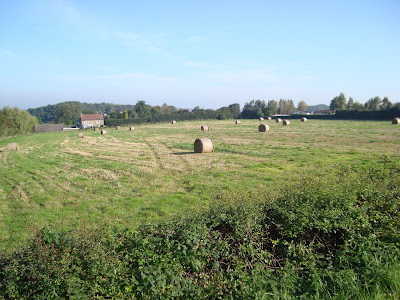 I arrived at Mum's for coffee and toast and dragged Jan and Dan out of bed (they had driven up the night before).  After an hour with them it was time to go and collect Jacqui and go to Ferndale Garden Centre for breakfast (we know all the best places!). I miss Jacqui so very much and it was just great to see her again. Moya and Fiona met us there and brought Michael (Moya's Grandson). 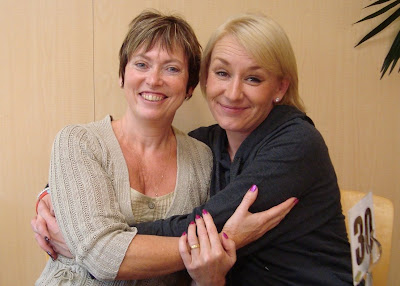 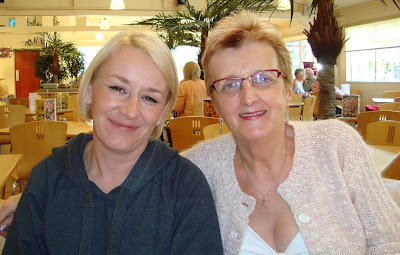 Moya
After a huge cooked breakfast we left the Garden Centre and I dropped Jacqui off at the Stables and drove round to see Shaun and Fiona. I've known Fiona (Andrew's Sister - more of Andrew later) since 1992 and she is a lovely girl! She kept me fed when I was skint and supported me through some trials and tribulations. We had a joint birthday party when I was 30 - and I had the great honour of being with her when she gave birth to Ellie - who answered the door at their house and has suddenly become 13!!! (as if by magic - overnight!) On Ellie's birthday Fiona nearly broke my hand and I still have some slight scarring of where her nails dug into the flesh on the back of my hand. 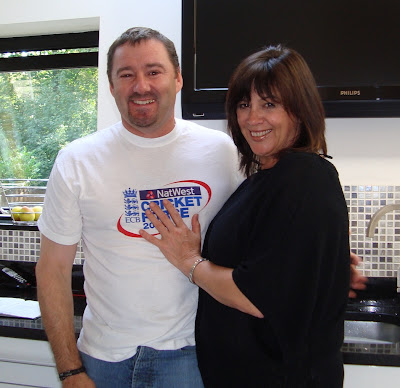 Shaun and Fiona
After an hour with them (I really could have done with much more time - we were laughing so much that the hour flew by in what seemed like a few minutes ) I went and collected Jacqui and off to meet up with Garry.
It was great to see Gaz again and we caught up on all the news. He told me all about his allotment ( I told you we were in the north) and his latest additions to the animals. He now has sheep. a Ewe called 'Colin' (don't ask) and two more sheep called 'Flymo' and 'Qualcast' - however - they're soon to be going into the freezer! Great names though. 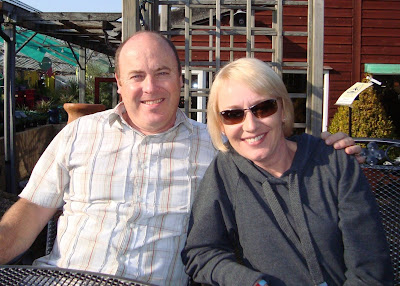 Garry
Time was by now pressing on - sadly I had to say Goodbye to Jacqui and Garry - and I had to get back in the car and shoot up the motorway to Meadowhall Shopping Centre to meet the twinnies. My Mum and Auntie Marguerita go to Meadowhall every Saturday (it's their leisure activity) and so if you want to see them on a Saturday - you too have to brave the hordes of people and pushchairs. Not really my idea of fun - but needs must! We had coffee and cake and much laughter - I wouldn't possible publish the laughter photographs - or they would never, ever forgive me! A quick stroll round the clothes department in House of Frazer - 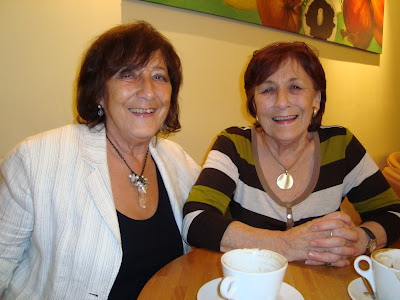 The Twinnies
By now it was nearly 6pm and I had to drive (again) about 15 miles north up to Stocksbridge. Stocksbridge is where most of the steel was produced when Sheffield had an industry to call its own - but now it's a lovely little town on the road between Sheffield and Manchester (it always was between Sheffield and Manchester - it hasn't moved) and it's where Andrew and Helen live. That's where I was staying the night - so it was great to arrive and kick off my shoes. Helen had cooked a great curry and we had a rather nice bottle (or 2) of wine. Many many laughs as we caught up...and their youngest daughter - Georgina - was there too. She's now a teenager - and the last time I saw her she was just a toddler. We listened to some great music - including John Shuttleworth - and loads of other stuff too. We didn't get round to playing cards though. 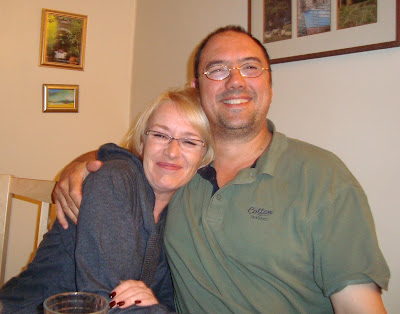 Andrew
This picture made me laugh as we're both wearing specs!!! So Middle aged. 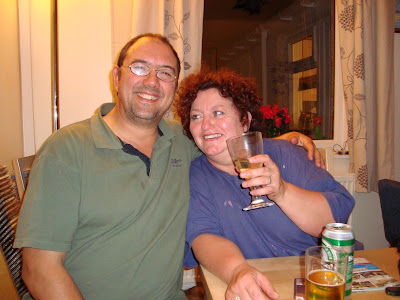 Helen and Andrew
Andrew is Fiona's brother (any resemblance?) and for many years was a pub landlord. Helen used to work with Christian and me and Rob and Lucy at the 'Rising Sun' on Abbey Lane - and we had some great great times there. Many, many, many drunken nights.  And many, many, many great Sunday lunches - followed by hours and hours of playing cards and drinking wine.
After a very very very long day - which I throughly enjoyed - it was time for bed. I was tired in a great way - it must have been all that clean northern air, and seeing all those wonderful people.
Posted by The Author at 8:03 am