Review of the week

Well - it's been a busy week. After my last post I spent Wednesday in Sheffield with my Mum and Auntie Mimi - we went to FAB dress shop and I got 2 new dresses for my birthday. Then - on Wednesday evening we went for birthday dinner celebrations with my oldest friends and my Mum and my brother. We had a fantastic meal here and a very nice evening. If you've never been there and you get the chance I would take it :)

Thursday and Friday were spent at Stoney Cove dive centre in Leicestershire doing more learning and more diving to finally qualify as a 30m diver by the end of play on Friday. This was not without hazards and I very nearly drowned as my buddy didn't check that my dry suit was zipped up - and I very nearly entered the water with the zip wide open. My suit would have flooded and I would have ended up on the bottom being eaten by a giant octopus (a la Captain Nemo - you just know it would have happened to me) fortunately my instructor has eagle eyes and spotted the horrific faux pas just before he launched me off the end of the jetty!!! Phew!

On Friday morning I woke up with toothache and a big blister / abscess in my gum. Ouch - it hurt - a lot. I left posselq with the job of finding me a dentist for the weekend -- or Monday at the latest.....then, in the car on the way to the dive centre the afore mentioned abscess popped!!!! Urgh - not pleasant - not pleasant at all. Now I am left with mild discomfort - some nerve pain and the joy of root canal work to look forward to tomorrow - or maybe she will just whip the bad tooth out altogether (it's at the back so no-one will see that it's missing)?? Who knows - but I do know that I shall wimper - a lot.

Yesterday we pottered about a bit then last night we went to a marquee in the middle of a field for Wendy's wedding party. Wendy is our cleaning lady and she is so lovely. When I first moved here she was the only person I knew apart from Posselq and she was always very friendly towards me. Anyway - she's now married to Robert and I hope that they'll be very happy together.

So a quick week review - I'm a year older than I was this time last week - a super scuba - ist, I have two new frocks, an appointment for root canal work - our cleaning lady got married and I didn't drown. Fab X
at September 27, 2009 2 comments:

Scuba Course in a gravel pit - day one! 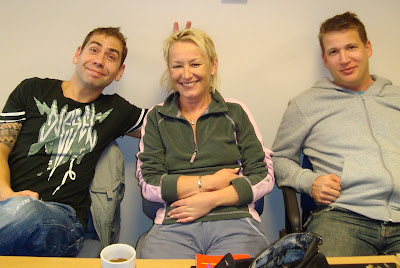 Oh My God - look at my hair!!! This scuba business is not condusive to looking glamorous - by any means. This picture was taken at the end of the day after three dives in the freezing cold water of a skanky gravel pit in Leicestershire - where the visibility was about three feet. Just enough to spot the sunken submarine seconds before I crashed into it. It was an eventful day. I learned that diving in the UK is not a pleasure leisure activity. I also learned that I don't like to be cold - not too bothered about the odd chill - but when my hands stop working and I can't do the simplest of tasks with them I am not a happy bunny :) I also realised that I remembered my basic training and when my dive buddy kicked my regulator out of my mouth while I was about 20 metres (that's over 60 feet - crikey!!) underwater - I didn't panic........oh no....not me.....cool as a cucumber (despite the very real risk of drowning) I did the drill - recovered it - and popped it straight back in my mouth again without batting an eye. I must have learned something then!!! I also learned that my buoyancy is not that good and it's not really that funny when your dry suit feet inflate and you end up hanging upside down in the water!!! (reminded me of when I abseiled - head first - down the side of The Grosvenor House Hotel in Sheffield for charity a few years ago!!!) Not once - but over and over again - to the point where the instructors were laughing at me and decided to christen me 'fruit bat'....I really need some leg weights!!!

All in all a good day - and I am now a qualified dry suit diver. More to come on Thursday and Friday - I can't wait!!!! Brrrrrrr x

When I report to the Scuba school tomorrow I have to take 4 passport photographs. I think it's so that they can issue your Padi ID card (but perhaps it's so they can compare you to the ugly ones on 'Britain's most wanted'!).

Anyway, I popped into Banbury (throbbing metropolis) to our local branch of Jessops to get the job done. The girl who served me was about four and a half years old - so probably has no empathy with middle aged woman wanting the photographer to 'get her good side'.

It's all digital these days - so they can 'ave another go if you're not 'appy with the results. Despite having spent ages in the bathroom and applying much Clinique and Bobby Brown...I wasn't 'appy with the results. Let's face it - it's taken me 46 years to get all these lines and wrinkles - twenty minutes and a hundred quid's worth of face products isn't going to make much difference!!

Now it's not even as if it's my passport or driving license or anything that may ever be seen - (apart from by some bronzed diving Adonis in some overseas dive resort)- so it shouldn't really matter how the pictures turn out - but because I'm feeling my age and therefore rather over-sensitive - it did....big time!

The poor shop assistant showed remarkable patience - especially when we got to attempt number 7 and I had started to enquire about nearby plastic surgeons.

Eventually I had six little pictures that I'm still not that enamoured with - but in a good light with a following wind I could pass for about 55.

What makes it even worse is that Posselq looks about ten years younger than he actually is...mind you - he's had a relatively easy life (until he met me) - so we'll take another look at him in about 2 years time and see how he's doing - shall we?

I bloody hate the fact that I am getting older - if I have to age (which - unless I can get a gig with Dr Who and become some kind of 'Time-Lord'- I can only assume is inevitable) I would really like to do it disgracefully.
at September 21, 2009 No comments:

This week I am spending 3 full days in a flooded gravel pit in Leicestershire to gain my next scuba diving qualification. I would like to be an advanced open water diver - which means that I will be able to dive to 30 metres instead of just 18 metres which is what I am qualified to do at the moment.

Posselq has booked us on a week's diving holiday in a few weeks time in Jordan - where the temperature will be a very respectable 30+ degrees - but because he's more qualified than me - if we want to dive together I need more training. (Actually if we dive together he could just drown me and nobody would know.....hmmm.........)

I have a feeling it's going to be a bit chilly in the flooded gravel pit in Leicestershire so a dry suit and some thermal undergarments are in order. 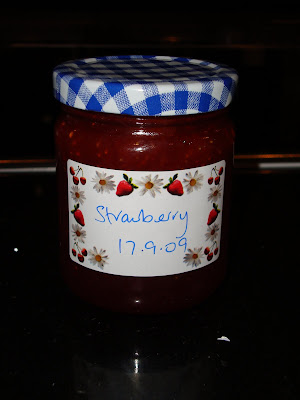 Okay, okay - I know it's sad - very sad in fact. This week I have learned how to make jam. All of the readers who complain that my blog has lost its edge will not be happy about my adventures with pectin, hot glass jars and wooden spoon - but hey ho - this week I have an impending birthday and will be 46 (that's downhill to 50) and so I must take up some pursuits which are suited to a woman of my age.

My first batch was strawberry - which was lovely albeit a tad runny - next there was redcurrant and blueberry - no setting problems there!.....then today - after three attempts I finally managed a few jars of plum jam. Technically the plum was difficult - wouldn't set you see - Posselq had to bob down to Tesco to get me a bottle of pectin - and even then I had to add more lemon juice....this jam making is very technical y'know!!! Finally the plum jam set and after just trying some on a scone with a big blob of clotted cream I have to say that it's delicious!
I really could do with joining the WI but I don't think they'd have me. I should perhaps start an alternative WI - where instead of learning cake decorating we could be shown how to beat small children without leaving a tell-tale mark - or - perhaps 'Bondage for beginners'....or how about 'Dope growing in a window box'...all ideas gratefully received. I do know all the words to "Jerusalem".....
at September 20, 2009 No comments:

....put your fingers anywhere near your mouth when cooking with chillies. I look like Lesley Ash !
at September 10, 2009 2 comments:

For goodness sake. Where were the censors! Hilarious!!!
at September 10, 2009 No comments:

Available on t'internet - Lobsters and husbands.

As I write this Posselq is cooking dinner. It's corn beef hash - but let's not go into that now - (suffice to say that I have 'back-up steaks' in the fridge!). Anyway we were chatting and decided to go onto t'net to see if you could order Lobsters on-line.

For some reason Google - when asked for 'Mail order Lobster' directed me to 'Mail order husbands'. It was so chuffing funny I simply had to share it with you. So - if you want a mail order husband - you should click here. My favourites (hmm yes please) are David and Steven - and I especially like Marcus's hat :)
at September 08, 2009 4 comments:

Have just been out to walk the dog. We stopped for a while under a tree (with low branches) for Millie to do her ablutions (!). One of the neighbours drove past and waved. I quickly looked up to wave and smashed my head on one of the low branches. Big bump, seeing stars and everything. Baffoon!
at September 04, 2009 No comments: