It's that time of year again - autumn!!! Horses grow more hair as they prepare for the winter and their coat becomes thick and warm. This is great if they live out in the field as they stay toasty throughout the "brrrr" chilly months. However, if they get ridden and exercised regularly they get too hot - a bit like you or me trying to run a marathon wearing a sheepskin coat!

So they get a haircut. Today is Phoebe's turn. I will be using my lovely expensive clippers which have new blades. There will be much wailing and gnashing of teeth (from her and me), a fight will ensue, and it will take all afternoon!!! The clippers make quite a lot of noise and vibrate against the horse's body - so it can be very tense!!! It is usually necessary to enlist the help of two or three bystanders (people always stand about and watch, and the critiscise your not so straight lines !!) to hold the neddy steady!!! There are different styles of clip which you can see here

I've just been woken up by the rain. It's raining cats and dogs out there - absolutely bucketing down. This is not good as Dan and Bugsy are going to a sponsored ride today, in open fields with lots of rustic type cross country fences to jump over!!! Very dodgy doing this kind of activity when the ground is wet as the risk of slipping (for the horse) are greatly increased.

However, I love it when it rains like this. I don't mind getting really wet through, and when you're watching the rain fall out of the sky , I always feel a kind of awe at nature. It doesn't matter how sophisticated we become as a race, how much technology we have, how important we feel we are......along comes some bad weather, and puts us right back in our place. We run around like lab rats trying to cope with it - and quite frankly we don't stand a chance!!!

Do you think this is Mother Nature trying to put us back in our place? Every now and again she flexes her muscles and lets us all know in no uncertain terms that she is very firmly back in charge!
Posted by The Author at 7:41 am 2 comments:

Do I have to admit my age?

Today is my birthday and so far it's going rather well. Dan and I went out to breakfast, and whilst we were eating I was simultaneously having my car valeted a few doors away - now how's that for self-indulgent Weybridge house-wife kind of living?

Christian was on MSN messenger nice and early to wish me a nice day, and he and Victoria sent me one of the rudest birthday cards I think I've ever seen!! I've had lots of lovely cards, and a few electronic birthday greetings via e mail. I've also received two of the biggest bunches of flowers ever, so much so that my living room now resembles Kew Gardens!!! I've been given some lovely gifts, from my favourite shop (the Pier), and also John Lewis and Habitat gift vouchers (yippee).

Now thatI'm 43 years old I've decided that I'm at that age where a lady (she's a lady?) no longer has to admit her age. I can deny it altogether, fib about it, start counting backwards, or as my Grandma Rosina used to do when asked her age ...say "I'm as old as my tongue and a little bit older than my teeth!" Although I have to say, when she's asked about her age nowadays she proudly admits that she's well into her nineties because she loves it when people respond with, "Well, you don't look a day over 85!!" You can see her glow with pride and begin to preen!!

ObviouslyGovernment officials will still have to be told the truth should they enquire, but I think everybody else will just have to be left guessing !!!!

The best answer when asked your age is to say "How old do you think I am?" and then the person who asked is duty bound to knock about 4-5 years off just to make sure that should they get it wrong they have erred on the side of caution and nobody gets upset!!!

I'm actually looking foward to being really old so that I can grimace and chunter at young people and hit them on the legs with my walking stick when they refuse to give me their seat on the bus!!! Bliss!!
Posted by The Author at 1:32 pm 5 comments:

Because I wasn't allowed to watch "Coronation Street" whilst growing up at home, now that I'm an adult I watch it all the time (because at 42 I'm old enough to do what I like!!!!). Every now and again there is brilliant northern humour and yesterday's episode was no exception.

Liz Macdonald was moaning on about something to her son, Steve...he was clearly fed up of listening to her droning on...and said...and I quote...

"there's only one person at a 'pity party' and they don't bring presents!" 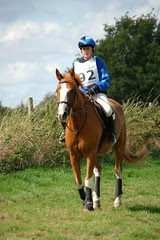 Today Dan and Bugsy and the groom (that's me) went to Longreach Cross Country competition. It was a lovely day, warm but very windy..and we had nice sandwiches!!!

Unfortunately they had a couple of refusals so didn't win - but then they went around the course a second time (non-competitive) and of course...when their scores didn't count they did it in the fastest time with no faults...typical!!!

Still they both enjoyed themselves and Bugsy had Polo mints!!!!

That was the week that was!

This week has been nice. I don't normally like the word "Nice" as I feel it's a bit lazy - there are thousands of adjectives which do a better job than "nice", but the week hasn't been exciting or splendid, or adventurous, or amazing, or anthing else other than nice!!!!

The weekend was good, involved a trip to Ikea (always a pleasure!!) Swedish meatballs, lots of picture frames (new camera!) and Dime bar cake (yummy). I discovered Eggs benedict in Cafe Rouge for breakfast and have been another twice (delicious). Dan went to Sheffield and came back again on Tuesday, so I had peace and quiet and the opportunity to really give things a good clean - also got to eat all the stuff I love which she normally turns her nose up at...scallops....lamb chops.....caesar salad...etc etc.

On Wednesday I decided new make-up was needed and after a disastrous make-over in Boots done a by a very willing young lady in a white coat who managed to make me look like the bride of Frankenstein I was advised to make an appointment at the "Bobby Brown" counter in Bentalls department store. I had a consultation with a very nice young man who did my make up and managed to lose 10 years along the way. Fabulous!!! I bought one of everything he had used and my credit card got a hammering - mind you it was a lot cheaper than a facelift.

On Thursday I went to the physio who decided to try acupuncture in my dodgy shoulder. The needle went in...hit a nerve....immense sickening bolt of pain, hot sweat, and I promtly threw up all over my saggy white bra (see previous posts!). Not a succesful visit!!!

Today is Saturday...so who knows what the day has in store!!!!! Fingers crossed for a nice weekend!!!!
Posted by The Author at 8:11 am No comments: