Such a perfect day 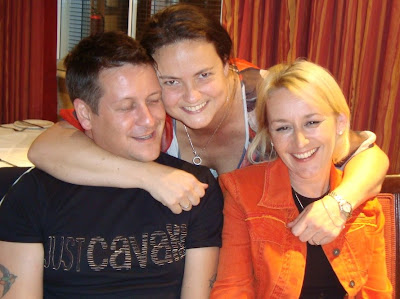 Today (yesterday) has been lovely. I had such a nice time. It started with brunch (I had a fish finger sandwich - honestly - but not a drunken one that's still frozen in the middle - not no no - this was a posh 'bistro' one...and very nice it was too!) at Bosco's in Surbiton with Mikey, and then we got the train into London. It rained and rained in London and we got really wet twice before we decided to let common sense take over and we bought a £3 umbrella from a street trader.
We went to Selfridges and John Lewis and then met Jo for a late lunch. In Selfridges Mikey bought me some of this which I absolutely love. How kind.  We shopped like maniacs as he needed a load of new clothes and had the help of some great shop assistants in Selfridges who made the whole thing lots of fun.
Then we did an hour in the huge HMV store on Oxford Street buying music and movies for Mikey to take back to Spain.
Tonight Jo and I went here to meet Mikey for dinner as that's where he is staying and had such a lovely time. It's one of my all time favourite places.
What a great day - and now it's time for bed  zzzzzzzz !!!
(Dan's going to 'phone again tomorrow when she reads this because that's her orange jacket I'm wearing!)
Posted by The Author at 12:49 am