A good turn - free wine - and then apple crumble!! 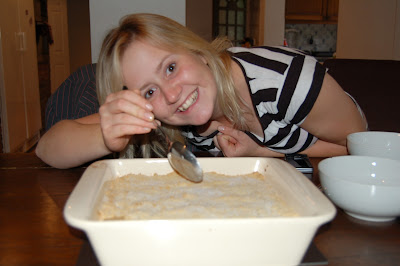 This evening when I was going to the yard to put Phoebe to bed for the night there was a guy standing at the side of the road at the entrance to the Hill (where we live). He looked lost and was speaking on his mobile phone. I stopped and asked him if he needed any help. He was waiting for his friend who was lost and was stuck at Tesco's car park at Brooklands. I spoke to his friend on the phone and rather than take ten minutes to direct him to where we were I just told his friend to hop in and drove him  round to Tesco - then  let them follow me back to the Hill. When we got back to the Hill I used my gate tag to let them into the estate - where they were visiting a friend's house for a party.
They were very grateful. Later on when I was coming back, they were waiting for me outside the house they were visiting, flagged me down  and invited me in for a glass of wine!!! So in I went - in my smelly riding gear - into a posh house - dropping bits of straw hay all over their carpets!! How lovely!! What a nice way to meet new friends!!!
Then when I got home - finally - Dan had cooked dinner. It was fab. And for dessert we had home-made apple crumble made with some delicious apples from Jan's dad's apple farm, with fresh cream. You can see from the picture that Dan is very proud of her cooking skills.
at August 17, 2008