I've just been away as I said in my previous post. Whilst away I met the most incredible person. It's so bizarre how the Universe conspires to introduce you to interesting and fascinating folk. When I arrived in Gozo late on Thursday I went to my friend Julian's apartment. He has people who visit the dive school staying there, divemaster trainees and people taking other courses etc. On Friday morning I was up early drinking coffee in the living room when this guy walked in wearing just his shreddies (underpants)...he looked rather the worse for wear and spoke with a pronounced scally-scouse accent. He had a shaved head and to be quite frank - resembled a burglar. Not being one to pre-judge I bid him a cheery 'good morning' and was grunted at in reply.!

He then disappeared into the bathroom, and Julian and I set off for the dive shop. A couple of hours later - this same guy strolled into the dive shop (by now he was fully clothed). Julian introduced him as Simon, and a few minutes later I went two doors down to get us all some coffee. He had arrived to help Julian train a couple of technical divers on a very difficult course.

Through the next three days I got to know Simon, and spent a lot of time with him, talking and picking his brains, and on one occasion when we were doing a cave dive and I started to panic a little bit - he immediately spotted the problem and gently guided me out of the cave and then stayed with me to make sure I was okay.

It turned out that his name is Simon Townsend, and he is one of the world's best technical scuba divers. He holds world records for deep dives and long dives. Within the dive community his name is synonymous with skill and experience. And there I am - little old 'flipper' me being able to eat with and talk to this chap for three evenings on the trot. Most divers would kill for that opportunity. He is a really lovely guy, totally willing to help and and advise novice divers like me, and spend time talking and coaching them. I leant more in three days than I have in all the courses I have done. 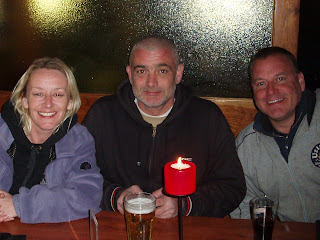 Me, Simon and Julian


Simon is a pioneer  in diving, one of those people who researches things and pushes the boundaries of what is accepted and what is safe - so that mere mortals like me can do more...safely. It was a complete honour to meet him.
at March 16, 2010